Leaps and bounds to capture investment in next-generation investment projects

With the global digital wave hitting Vietnam, the country has been actively renovating itself into an attractive destination for new-age investors. 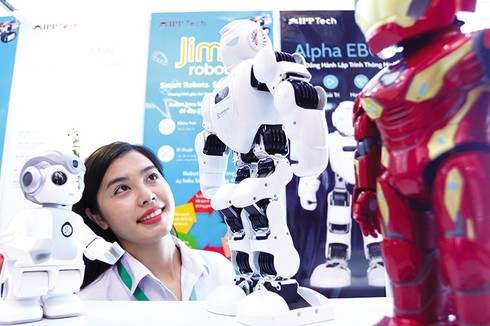 More and more investors are coming to Vietnam to set up hi-tech manufacturing and production facilities
As one of the key speakers addressing the 800 participants gathering for the Vietnam Business Summit 2019 organised in Hanoi recently, Pham The Truong, general director of Microsoft Vietnam, was discussing the global trend of digitalisation.

“Seven out of the 10 largest, most influential companies in the world are operating in digitalisation and lead the world’s digital transformation,” Truong said. “In such companies, there is no room left for a piece of paper, all has been digitalised.”

Sharing about the results of a recent survey by Microsoft and IDG, Truong said that one-fifth of economic growth is from digitalisation, while 65 per cent of future jobs in the field of digitalisation do not exist yet. Some 27 per cent of the labour force will be replaced by AI and technologies. Some 17 per cent of salary funds for the group of high-salary jobs are spent in the digital field. “Much of the current skillset of employees will be useless in the future, so workers should always be ready to upskill,” Truong suggested.

Addressing the event, Deputy Prime Minister Vu Duc Dam said that the Vietnamese government always accompanies and supports enterprises to invest in Vietnam. “We determine that your success is also Vietnam’s success, your difficulties are ours, too,” he stated.

According to him, Vietnam is now extremely open, not only in terms of import and export turnover, but also open to all initiatives from enterprises and investors. The country is creating a business-friendly climate where all firms can compete equally.

“Vietnam has 13 free trade agreements with most major economies around the world and currently accommodates investors from more than 130 countries. So far, there are more than 30,000 foreign-invested projects with a total investment capital of over $300 billion,” he added.

He also affirmed, “Vietnam today is not only a destination for manufacturers but also many businesses involved in the development of new technologies that can change the world for the better.”

Over the years, Vietnam’s renovation process has been marching forward vigorously. On the 2019 global competitiveness rankings, Vietnam has improved its position to 67th, rising 10 positions in a single year.

“Vietnam has been strongly improving indicators directly related to new technology trends and the development of the Fourth Industrial Revolution, including indexes on IT application,” DPM Dam said.

He also informed the business community that the Politburo and the Party have issued a resolution on the Fourth Industrial Revolution, in which they tasked the improvement of bad indicators and making preparations to take advantage of the opportunities arising from the revolution.

Meanwhile, Vu Tien Loc, chairman of the Vietnam Chamber of Commerce and Industry (VCCI), said that most reputable international organisations are optimistic in their forecasts for Vietnam’s economic growth.

“Some 90 per cent of domestic and foreign businesses believe that their situation will be more stable and better in the future. There were 130,000 newly-established and re-operating businesses in the first nine months of this year,” he said. “About 70 per cent of foreign-invested enterprises said that they would continue to expand their investment in Vietnam.”

In fact, institutional reforms in Vietnam have been accelerated in order to promote integration, leading to improved market confidence, stronger enterprising spirit, while the ecosystem for startups is being completed.

“These will be the fulcrum and the fuel kick for the development of digital economy in Vietnam,” Loc said.

Particularly, in 2020, Vietnam will be one of the first countries in the world to deploy 5G. Many large technology enterprises in Vietnam such as Viettel, FPT, and VNPT have been investing heavily in Vietnam’s technology infrastructure.

These will be Vietnam’s new advantages in the digital economy, complementing its traditional advantages of favourable geopolitical position, socio-political stability, large market size, as well as young, abundant, and low-cost labour force.

On its journey towards inclusive sustainable development, the Vietnamese economy will need to take a turn towards innovation and digital technology while ensuring that enterprises become the driving force – in a way that keeps people at the centre. This will necessitate transparent institutions and a symbiosis between foreign-invested and local enterprises.

This way, Vietnam can become a safe destination and reliable business partner of the world. VIR