The Ho Chi Minh City (HCMC) Department of Planning and Architecture has just submitted to HCMC People’s Committee a proposal for the project ‘Forming and Developing the Eastern highly interactive, innovative urban area in the period 2020-2025’.

This area is where the to-be Thu Duc City is located. The project estimates the necessary state budget for infrastructure, economic, and social growth, reaching US$1.8 billion. 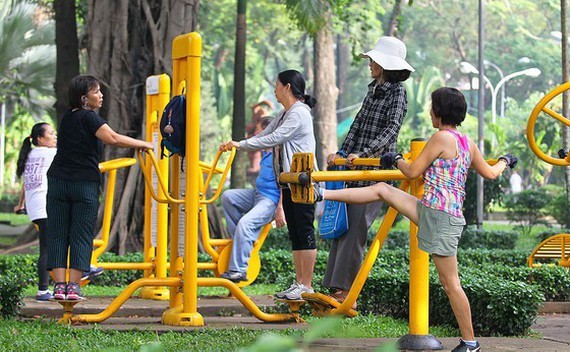 The Eastern highly interactive, innovative urban area of HCMC, or the upcoming Thu Duc City, consists of Districts 2, 9, and Thu Duc, with a total surface area of over 211km2 and accommodating more than 1 million residents.

The existing advantages of this golden area lie in its prime location – the center of the Southeast are, having synchronous traffic infrastructure to link with neighboring areas for stable economic growth, such as Metro Route No.1 from Suoi Tien in District 9 to Ben Thanh in District 1 (coming into operation from 2021), Ring Road No.3 from My Phuoc – Tan Van – Nhon Trach, HCMC-Long Thanh-Dau Giay Express Way, National Road No.1A, National Road No.1K, several water routes from Saigon River to Dong Nai River.

All of them has enabled this innovative urban area to develop the logistics industry via multi-channel linking methods.

The area’s startup ecosystem has been formed successfully, with the participation of many startup supporting centers, international as well as domestic investment funds. Among them, Saigon Hi-tech Park (SHTP) in District 9 and Vietnam National University – HCMC (VNU-HCMC) in Thu Duc District are playing the leading role in boosting startup activities here, making the area the largest startup center nationwide.

One notable component of the Eastern highly interactive, innovative urban area is the establishment of Thu Thiem new urban area in District 2. The land there is ready for large-scaled investments to create international financial centers, trading zones, and high quality residential areas.

In addition, Rach Chiec Sports and Fitness Center, Thuong Tho Port area, and Tam Da area in District 9 are all identified as a part of this innovative urban area.

All of the above infrastructure will help to make Thu Duc City a level-1 urban area inside HCMC. This city will become a key economic zone of the South, experiencing the complete digital transformation process. It is supposed to be a smart city, to attract high-skilled human resources for economic, cultural, and social growth, while still being able to protect the environment.

The upcoming Thu Duc City is expected to have 1.5 million residents in 2030, increasing gradually to 1.9 million and 3 million in 2040 and 2060 respectively.

Therefore, urban planning should be prepared accordingly. Public transport should answer around 50-60 percent of the community’s travelling demand in 2040, and the capacity of urban flooding prevention should reach 80 percent (only one serious flooding per 5 years).

10% of this Eastern urban area will be public parks and common open space, 30 percent of which will be regulating reservoir. 20 percent of the total planning surface area is saved for natural cover to allow water infiltration.

As to administration, the city identifies the management apparatus for the mentioned project, who can continuously monitor it without being interrupted by changes of terms. This is the key factor in the period from 2020-2025 to decide the success of the project. These leaders will be the people to implement reform solutions in investment, construction, land use, and finance.

HCMC is seriously and scientifically preparing policies for the aspects of land collecting and land resource forming; investment and development; project and land use bidding; capital attraction for public infrastructure construction via urban bonds; incentives for key businesses.

The municipal authorities have decided on the 3 development stages for the new Eastern highly interactive innovative urban area. The initial one is from 2020-2022, then the growing one from 2023-2030, and lastly the perfecting one from 2030-2040.

In the first stage, HCMC is focusing on creating a strategic development frame, a stable mechanism-organization; identifying prioritized industry group; establishing a connection among the local authorities – investors – educators; and forming traffic links to neighboring areas.

In order to fulfill the above goals, there is a great capital need among state units, coming to VND41,660 billion (approx. US$1.8 billion), including VND30,000 billion ($1.3 billion) on traffic facilities, VND6,400 billion ($277 million) on urban flooding prevention, VND4,400 billion ($190 million) on digital transformation, and over VND288 billion ($12.4 million) on preparing new practical policies.

“Coastal urban area” is a phrase that is appearing increasingly in the print and electronic media.