HCM City Stock Exchange (HOSE) on August 9 said the exchange has shifted to operate in accordance with a new scenario after coronavirus positive cases were discovered at HOSE office late last week. 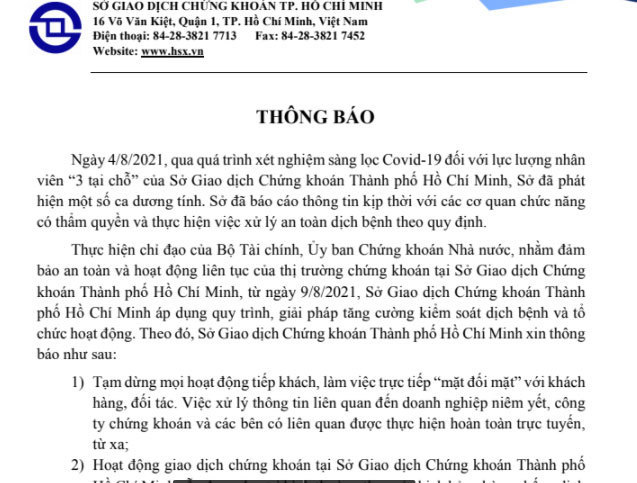 Following instructions of the Ministry of Finance (MOF) and State Securities Commission (SSC), in order to ensure the safety and continuous operation of the stock market, since August 9, HOSE has applied a new working process with measures to strengthen control to prevent the pandemic.

HOSE has temporarily stopped all reception activities, and face-to-face meetings with clients and partners. The handling of information related to listed companies, securities companies and relevant parties will be implemented online.

The securities transactions at HOSE will be maintained as usual in accordance with the scenarios prepared before.

According to SSC, HOSE has built up different operation plans according to possible risks. The stock exchange system can set up operation centers at different geographical positions, not necessarily fixed at one location.

HOSE has a disaster recovery center located far from the headquarters. All employees of the stock exchange have been divided into groups and are working in shifts. A representative of SSC said that in all situations, the exchanges will still be operating as usual.

As of July 30, 469 securities items had been listed on the bourse and put into transactions, including 385 shares, 2 closed fund certificates, 7 ETF (exchange traded fund) certificates, 49 covered warrants and 26 bonds.

However, many problems still exist, including congestion of orders. The problem arose in late 2020 when the number of new investors joining the market began to soar.

Solutions were applied, which helped increase liquidity to VND30 trillion per trading session, and put Vietnam into the top 3 in Southeast Asia.

HOSE in early July began using a new system developed by FPT which has three times the capacity times than the previous one, capable of handling 3-5 million orders a day.

Securities investors experienced a memorable time in 2020 and H1 2021 when records were made. But the ‘buy and make profit’ period is over. Hot and easy money no longer exists.