For natural development of the Mekong Delta

Resolution 120 on sustainable development of the Mekong Delta issued three years ago has helped create “living with nature” methods as targeted. 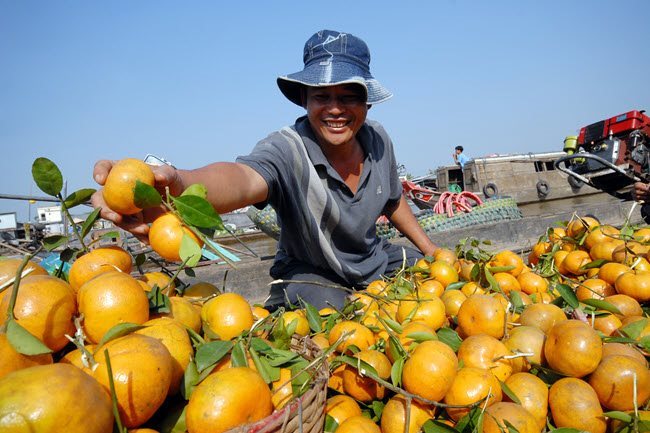 On the sidelines of the third conference on climate resilient and sustainable development of the Mekong Delta held in Can Tho City last week, Deputy Minister of Agriculture and Rural Development Le Minh Hoan noted that after three years of implementation of Resolution 120, many “living with nature” farming models in the freshwater, brackish water and saltwater regions of the Delta have been changed appropriately.

Mr. Hoan cited an example that instead of building dikes to hold freshwater, farmers in coastal provinces have made adaptation by growing better saline resistant rice varieties or switching to raising shrimps or to the rice-shrimp, rice-fish and rice-lotus intercropping models corresponding to different conditions.

Nguyen Van Lanh, a farmer adopting the rice-lotus intercropping model in the upstream district of Hong Ngu in Dong Thap Province, said the model is a respect to the natural law. Instead of building dikes to cultivate the third rice crop, farmers let water into the rice field and grow lotus in the submerged field. “Along with lotus, farmers can also raise freshwater fish in the field to increase income,” he said. With this rice-lotus intercropping model, he said the rice field still receives alluvium normally. So, the soil is not overexploited, while it is favorable for the next rice crop, as rice bacteria are interrupted by the lotus crop. Also, the natural ecology is protected because farmers do not have to build dikes for rice farming.

According to Pham Thien Nghia, chairman of the Dong Thap Province People’s Committee, one of the efforts the province has proactively made in the wake of the impact of climate change is the gradual reduction of the third rice crop. “Without the third rice crop, we can reduce a volume of 3.8 billion cubic meters of water,” he said. This is a correct approach suitable to the natural law in the context of a drastic decline of upstream water.

In addition, Dong Thap has stopped using underground water. By end-2020, the whole province almost stopped using underground water and turned to surface water. Mr. Nghia said this was an effort to share with localities downstream. “The province has changed zoning plans along the Tien and the Hau rivers towards restricting environment polluting projects to protect the environment of the Mekong Delta,” he added.

Deputy Minister Hoan noted that adaptation, with the change in rice crops or farming short-term crops or rice along with shrimps and fish, helps improve not only the quality of rice but also the fertility of soil. With this approach, farmers do not have to spend heavily for fertilizers and chemicals, not to mention the costs associated with harmful effects for the ecology, human health or farm produce brands.

Minister of Planning and Investment Nguyen Chi Dung said the State budget projection to support locally managed projects in the Mekong Delta in the period 2021-2025 is around VND266 trillion, up 20% against the figure for the 2016-2020 period, with some VND162 trillion from local budgets. In addition, the State budget channeled through some ministries, such as transport, agriculture and rural development and health, to develop projects in the region is around VND121.6 trillion.

With this budget, Mr. Dung said several key projects in the region will be completed, including the Trung Luong-My Thuan-Can Tho Expressway, the Can Tho-Ca Mau Expressway, inter-regional routes and some national highways.

“Considering the trade alliance cluster, one province does not necessarily have to follow the other in pineapple farming, but it can engage processing enterprises and equipment and technology suppliers. Those investors will ally and support each other to develop the pineapple trade in a sustainable way,” Mr. Hoan said.

To have the infrastructure available in the medium term, it needs consideration for economic space connectivity. “Viewed from the economic space, the picture for infrastructure is clearer. For example, where is better for logistics and where is more favorable for warehousing,” Mr. Hoan explained.

The State will take charge of creating a workable economic space. “Then authorities will invite the participation of enterprises. I think they can partly solve the problem of investment resources for sustainable development of the Mekong Delta,” Mr. Hoan said.

Upon discussion of inter-regional connectivity, Hoan said local authorities often focus on infrastructure connectivity, mainly transport infrastructure. However, he argued that it must start with economic space connectivity first before any decision for infrastructure. “Take the economic space for agriculture as example. Hau Giang Province has pineapple farming and Kien Giang Province the same. Why do the two provinces not cooperate to form a large material growing area?” Mr. Hoan asked. He thought that when localities form the production space alliance, they can easily call for investment to develop trade alliance clusters.

During a Government meeting on March 31, Prime Minister Nguyen Xuan Phuc gave his in-principle approval for a loan of US$2 billion from international lenders to develop the Mekong Delta region.