A road project which is still underway in the central province of Thua Thien-Hue has been seriously damaged after Storm Vamco, which has raised public concerns over the work’s quality.

The pedestrian road located in the east of Lap An Lagoon in Lang Co Town is 3.4 kilometres long and has a total investment of VND172 billion (USD7.47 million). 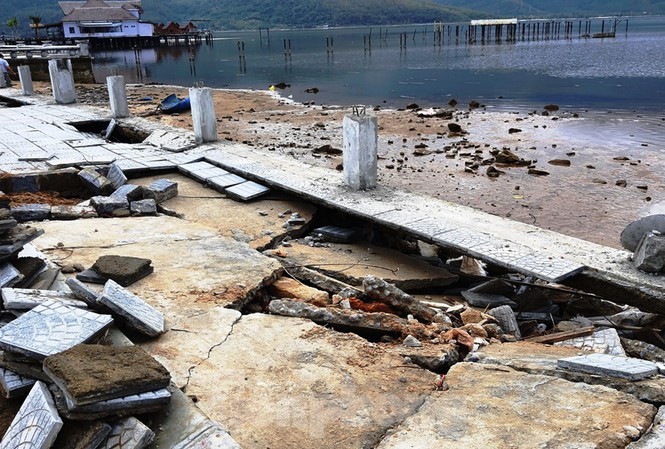 Following Storm Vamco, many sections of the road pavements have subsided and cracked, creating holes. The dyke adjacent to Lap An Lagoon is even in a more serious condition with erosion and many of the handrails damaged.

According to the provincial Management Board of Economic Zones and Industrial Parks, the project investor, the deterioration is due to the bad impact of Storm Vamco which happened in the central region of Vietnam on November 14-15. The total loss has been estimated at around VND5 billion (USD217,391).

The water level of the lagoon increased because of rain caused by the storm. The lagoon waves were also so strong that hit the dyke, harming the handrail and eroding the road.

However, many local people have expressed their outrage over the quick deterioration of the road, saying that Storm Vamco only lightly affected by Thua Thien-Hue. The road is situated by the lagoon which does not often have violent waves like the sea. The residents have voiced their concerns about the road quality.