Xiamen Port Holding Group has had a working session with the Ha Tinh People’s Committee, expressing its willingness to open the Vung Ang – Xiamen container route and develop a port in Vung Ang. 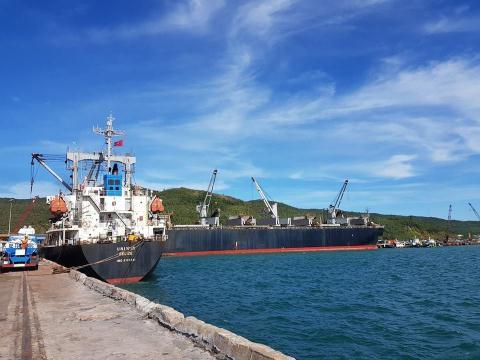 According to Thang, the Lao Government has asked for a prefeasibility study on a railway project that links Laos and Vietnam. The new railway project, capitalized at $2 billion, has the length of 400 kilometers, from Thankhek district in Laos to Vung Ang Port in Vietnam.

“This railway will be an important gateway for investors and businesses to cooperate and develop a cargo transport route from Laos and Thailand to other countries through Vung Ang seaport,” Thang said.

The Ha Tinh provincial authorities have promised to create favorable conditions for Xiamen Port Group to survey and invest in the port and logistics in Vung Ang.

Under the Vung Ang Economic Zone (EZ) development plan approved by the Prime Minister, Vung Ang EZ, established in 2007, is a steel, hydropower and deep-water port center of the region and the country.

To date, Vung Ang has attracted 137 investment projects, including 80 domestic invested projects and 57 foreign invested ones. The projects are mostly in the fields of industry, harbor, thermopower, renewable energy and post-steel development.

Prior to that, many large corporations also sought to invest in Vung Ang, including the joint venture between Hong Kong’s Lee & Man and Japan’s Hokuetsu, Germany's Siemens and Taiwan's Wei Yu Engineering.

“We welcome investors to come to develop container routes and logistics centers. However, will the project affect the national defence and security?” said Le Van Bay, respected logistics expert.

“We can invite foreign investors to Vietnam to develop logistics in Vung Ang. However, we need to have cautious measures and strengthen supervision,” Bay said.

Meanwhile, Dang Dinh Dao, Director of the Institute for Economic and Development Research under the Hanoi Economics Institute, has worries about the development of ports in the central region.

He said investors have been flocking to the central region to develop ports. Local authorities all want to develop ports in their provinces. This has caused difficulties for management. Many large ports are heavily invested but not well exploited.

He saud that the current way of investment will cut Vietnam’s port system into pieces, cause pollution and make traffic congestion more serious.

Chinese investment up while FDI approvals for Japan and S.Korea down

Signs of a slowdown in FDI have been recorded from two key markets, Japan and South Korea, though spikes have been seen from China despite projections that Vietnam would benefit from the Sino-U.S. trade war.

The investment capital keeps flowing to Vietnam, bringing concerns about the country's capability to absorb such a high level of capital resources.