Catfish products saw the strongest decline among seafood exports in the first six months of the year. With weak demand, a gloomy year is anticipated for the industry.

Companies have been affected because of Covid-19's effects on major export markets, while farmers have suffered heavily as catfish prices have been low since 2019, now hovering around VND18,000-18,500 per kilogram. With this selling price, they incur a loss of VND3,500 per kilogram. 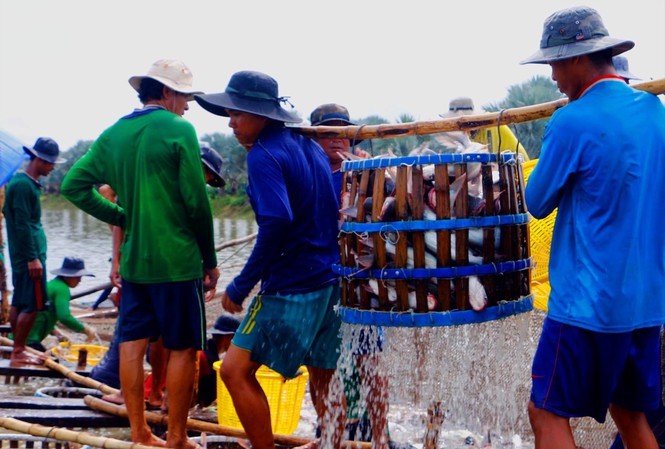 Nguyen Van Dat in Can Tho City leases 1.5 hectares of ponds to produce catfish breeders. In general, the production process lasts three months, but Dat has been farming for nearly one year with moderate feeding, because the selling price was too low months ago and he hoped that prices would increase again. But he finally gave up and has sold breeders at a loss.

“I have no other choice than to sell fish at a loss to get money to continue farming, while waiting for the prices to increase again,” he said.

According to Vo Dong Duc, chair of Caseamex, the seafood industry fell into distress in 2020 because of unfavorable conditions which came at the same time.

Climate change, with drought and saline intrusion, has caused freshwater shortage, leading to difficulties in farming. The catfish price, after reaching its peak in 2018, has been sliding since 2019, causing big losses to farmers.

The situation has worsened since Covid-19, which caused demand to decrease dramatically. Duc of Caseamex said the company has had to postpone a lot of contracts and cannot contact partners because of measures to prevent the spread of coronavirus.

According to Duong Nghia Quoc, chair of the Vietnam Pangasius Association, exports have been going very slowly, resulting in a decline in farming area and output.

Commercial catfish has been selling at below production cost for a long time, causing heavy losses. Meanwhile, export companies are struggling with bad debts and higher inventory levels.

The latest report of the Vietnam Association of Seafood Exporters and Producers (VASEP) showed that Covid-19 continued to have a big impact on Vietnam’s seafood exports in Q2. The total seafood export turnover in H1 was $3.5 billion, down by 10.5 percent compared with the same period last year.

Most seafood products saw a decline in exports, while catfish saw the sharpest decline with $659 million worth of export turnover, a decrease of 31.5 percent.

Exporters are mulling plans on how to increase shipments to the US and China after Covid-19 ends.

The US Department of Commerce (DOC) has lowered anti-dumping duties on tra fish (pangasius) products from Vietnam following its official conclusion of its 15th period of review (POR15) from August 1, 2017 to July 31, 2018,