At the year-end seafood trade fair, visitors had a nice surprise as they could enjoy 90 dishes made from catfish by famous chefs – Quoc Vo and Chiem Thanh Long. 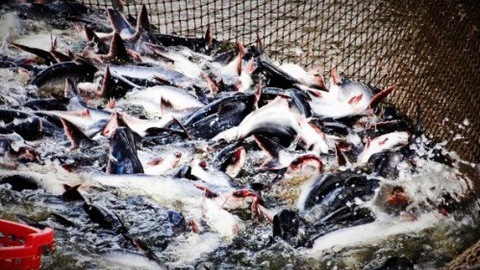 The performance at the trade fair was part of Co May Company’s strategy to introduce catfish to the domestic market.

“We are creating a variety of products from catfish to bring fish to the dining table of Vietnamese people,” said Pham Minh Thien, general director of Co May.

Catfish farmers and exporters experienced a tough 2019 year as the export markets were gloomy and the catfish prices fell sharply. By the end of November 2019, Vietnam’s catfish still could not escape the minus growth rate compared with the same period of 2018.

According to Thien, this was foreseen two years ago. As the catfish prices escalated, farmers rushed to farm catfish. Some farmers even doubled their farming areas, thus leading to the oversupply.

Farmers cannot sell domestically to mitigate risks as Vietnamese are not familiar with catfish.

It will take seafood companies a lot of time and effort to conquer the home market.

Also trying to exploit the domestic market, Vinh Hoan JSC is trying to make snacks from fish skin. However, though the leading company in the industry, the company also anticipates difficulties.

The company saw revenue decreasing by 13.3 percent and profit by 5.3 percent as of Q3 2019 because of the decrease in both sale volume and selling price.

The demand from the US, an important market for Vietnam, decreased dramatically by 60.2 percent compared with the same period last year.

Vinh Hoan and Bien Dong are the two companies which can export catfish products to the US market with the tariff of zero percent. In order to be able to continue exporting catfish, many companies try to farm fish in accordance with organic standards.

According to the Vietnam Association of Seafood Exporters and Producers (VASEP), many markets have shifted to consume organic catfish fillets, such as the US, Germany and Japan.

Germany, the third largest export market for Vietnam in Europe, has increased imports by 36 percent compared with the same period of 2018 and the import products were frozen organic catfish fillets.

Organic catfish products were sold at the high prices of $9.6-9.78 per kilogram, but they were still chosen by consumers.

A series of problems are affecting Vietnam’s catfish industry, including a sharp fall in catfish material price and decrease in breeder quality. The industry has lost its monopoly. On the world market.

Vietnam’s catfish exports have seen a sharp decline because of trade barriers and price fluctuations in the world market.

icon
10,000 businesses dissolved, thousands of others in danger
icon0