Many streetfront buildings in large cities that house shops that were busy in the past are idle because business activities have declined due to Covid-19.

A survey in mid-July by VnExpress found that many streetfront houses with 2 or 3 stories in central district 1 of HCM City have been idle for months. On the entrance doors are offers to sell or lease and phone numbers for contact. 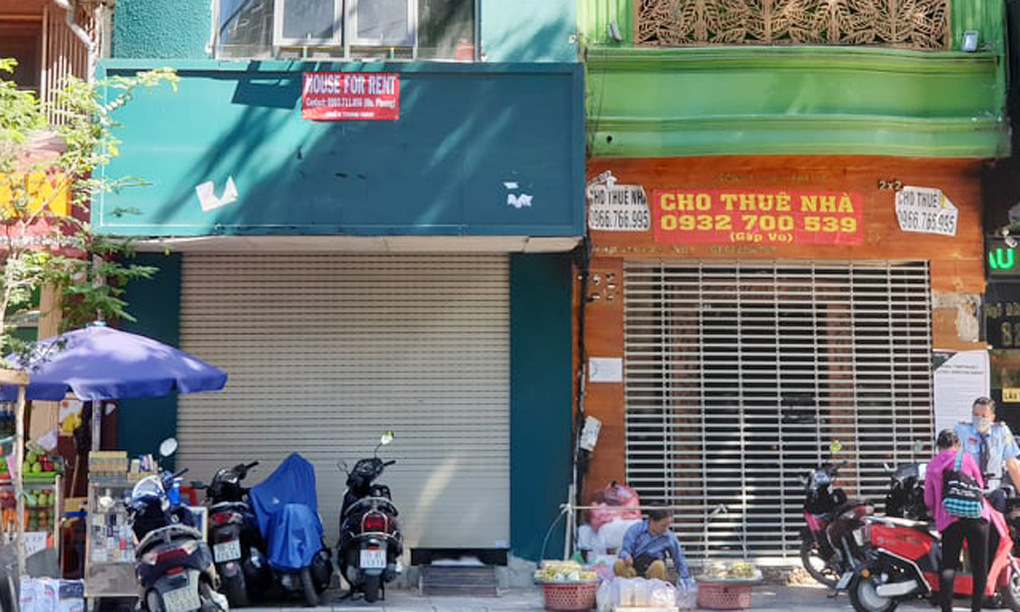 Business became sluggish in the first quarter of the year, continued in the second quarter and has shown no signs of improvement. As the situation continues to be gloomy, owners temporarily stopped business and gave back retail premises to landlords. Dental clinics, spas and tourism firms have also left.

Binh, a real estate broker in district 1, said he had never seen such a weak market. Though landlords have lowered rents, they still cannot find tenants.

Binh said that a dental clinic chain shut down all its branches located in advantageous positions in the central area of the city.

The latest report on the commercial real estate market by Savills HCM City confirmed that many eateries and fashion and service chains have had to close their doors.

According to Savills Vietnam, potential tenants are seeking offers at a discount rate of up to 40 percent.

Meanwhile, CBRE reported that the rent of shophouses in HCM City has decreased by 20 percent compared with pre-pandemic days. The rental period has been shortened to 2-3 years from 5 years as previously seen. Some businesspeople are maintaining existing shops, but canceling plans to expand their chains.

First, the rents had already been pushed up to overly high levels, which went beyond tenants’ budgets. Second, purchasing power has been on the decrease, which has slowed down business activity. And third, the lack of foreign travelers has also weakened business activities in HCM City’s central business districts (CBD).

The Vietnam Retail Association (VRA) complains that the retail premises in Vietnam are the most expensive in the region and are even more expensive than in Dubai.

Businesses now have bigger choices for retail premises as the rent has decreased significantly.

F&B firms prepare for possible second round of social distancing

Though local F&B businesses don't want social distancing to return in August, the experiences they had in April are helping them prepare.

icon
10,000 businesses dissolved, thousands of others in danger
icon0