Black credit with interest rates of up to 1,400% per annum bleed borrowers dry

It is now easier than ever to borrow money through apps, but paying back the debts can be difficult since interest rates can be 700-1,400 percent per annum.

On the way to Alley No 534 on Le Trong Tan street in Ha Dong district, Hanoi, one can see numerous ads about ‘super fast, super cheap and super convenient’ loans on the wall. 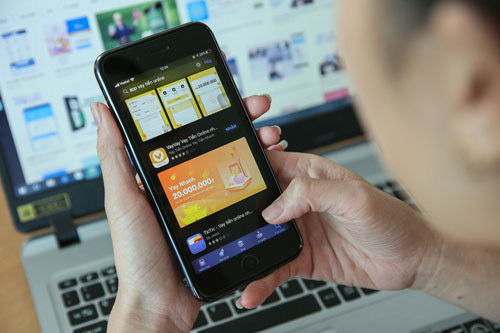 The local authorities and people have to get rid of the ads regularly. But just some days later, ads once again appear on the wall and electricity poles.

The loans with very simple procedures and no collateral required have reached every corner of society, in both cities and rural areas.

The government’s report to the National Assembly on the prevention and fight against crimes showed that 815 defendants in 513 cases were prosecuted in the first nine months of the year for charges related to black credit, protection activities and debt chasing.

Of these, 528 defendants in 243 cases were prosecuted for lending money at exorbitant interest rates in civil transactions, under Article 201 of the Penal Code.

Meanwhile, a report from the Ministry of Public Security showed that one year after the Prime Issued Directive 12 on preventing and combating black credit crimes, usury was no longer being carried out in the open air, but black credit still exists with many complicated cases reported.

In addition to the traditional way of lending, exorbitant loans nowadays are also provided online through apps. The lenders approach borrowers through apps or websites.

The lending activities have been developing rapidly because the procedures are very simple. Borrowers just need to provide photos, identity cards, driving licenses, residence registration books and bank accounts to get loans, from several millions of dong to hundreds of million dong.

The typical characteristic of the loans is that they have exorbitant interest rates, up to 1,400 percent per annum, according to the report.

In November 2019, the HCM City Police discovered Chinese lenders were providing loans with an interest rate of 4.4 percent per day, or 1,600 percent per annum.

In this case, Chinese lenders set up a finance company under a Vietnamese name as the legal representative. Clients were told to download one of three apps ‘vaytocdo’, ‘Moreloan’ and ‘VD online’ to their mobile phones to make transactions and get loans.

According to the police, from April 2019 to the moment of discovery, 60,000 lending transactions were carried out through these three apps, totaling VND100 billion.

The Ministry of Public Security has also pointed out problems in P2P Lending, imported to Vietnam recently. There are about 100 P2P companies, mostly managed by Chinese.

Peer to peer lending (P2P Lending) will become legal in Vietnam after a draft decree on fintech management is compiled.

Banks are pushing the sale of life insurance products (bancassurance) in the context of low credit growth since the beginning of this year due to the impacts of the COVID-19 pandemic.