Black credit leading people to dead end, with no escape from debt

Covid-19 has caused many people to lose jobs and has paved the way for black credit to emerge.

The public was stunned recently by the news that a junior college lecturer in Kien Giang province, born in 1993, committed suicide in May as he could not pay back a loan he got via an app. 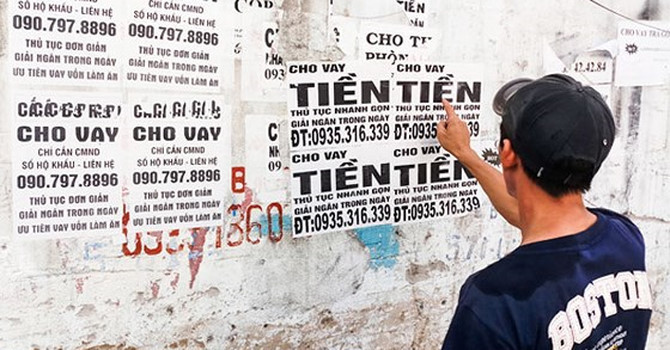 Ther are numerous ads about loans

The victim of the black credit borrowed VND5 million, or around US$215. As he could not pay the debt after seven days, he had to bear fines for slow repayment and higher interest rates. The app then suggested that he borrow money from other apps to pay old debts. Just several months later, his total debt had reached VND200 million.

As lenders continuously called and threatened him, the man suffered from mental persecution and lived in fear. Finally, he committed suicide.

According to the Ministry of Public Security, in the first six months of 2020, the number of criminal cases of this kind increased by 700 percent compared with the same period last year.

Analysts said that once people have to access black credit, they won’t be able to escape it. Because of exorbitant interest rates, borrowers will be deep in debt and pushed against the wall.

A study from the World Bank showed that 75 percent of Vietnamese cannot access official financial services though they have high demand for loans, especially small consumer loans. They are the targets of black credit.

Black credit has been a headache for management agencies for many years. Economists believe that it is necessary to use financial solutions to scale down black credit. They said Vietnam needs to reshuffle the financial system and bank credit to allow businesses and people to easily access bank loans.

Black credit with interest rates of up to 1,400% per annum bleed borrowers dry

It is now easier than ever to borrow money through apps, but paying back the debts can be difficult since interest rates can be 700-1,400 percent per annum.

Despite a credit slowdown in the first half of 2020, some private commercial banks have still asked the State Bank of Vietnam (SBV) for a credit growth expansion to prepare for a peak lending season expected at the end of the year.